Wow, overboard at all?

indica said:
Wow, overboard at all?
Click to expand...

overboard is two QSC (custom eminence) 18" drivers with a 1600watt power handling each, about 18mm of real XMAX one way

Drivers are on my shelf waiting for me.

Laid down the shag rug that arrived today. Predictably, everything new sounds awesome. Feels nice on the toes and probably cuts down a load of bounce. Just waiting on the curtain to be hemmed then I'll do another room calibration after install. Maybe there'll be something in the graphs when I do.

Staff member
#2 graduated this year and has now moved out (!!!!!!!) closer to his new job as a real person.

As a graduation present I offered to buy him some speakers and an amp for the new place. Just bookshelf jobbies and a simple amp. Relatively small room.

Ended up with Wharfdale Denton 85s and an NAD C328. Bit concerned the D class amp would be too bright but no problem.

Sounds incredibly good. I heard some original Dentons years ago and was quite impressed so these anniversary models were on the list. Listened to a range of the usual suspects from Polk etc and these were best to my ears. Worth a listen.

Of course now that a bedroom is vacant it has become a sewing/ironing etc room. Can you set up an amp and speakers for me... ok...

Staff member
Following on from above and the scumtree experience I ended up getting a good deal on some Acoustic Energy AE100 speakers which will be more than ok for an ex bedroom. This gave me the opportunity to look at how to drive them and as a result the setup I had in my study migrated. The sewing room has an 8"sub and small basic T class 20W amp with single input. That will change to a BT dongle thing which hopefully works.

Thus my study now just has a pair of Linn Kans and nothing to drive them with. So obviously the first thing I did was pick a second hand 10" sub to go with them. The sub is the baby brother of the 12" I have in the lounge so I know the manufacturer. Then I decided it was time for a valve amp so that is being looked at very carefully... And then time for new speaker cables, something sexy. I quite like the look of braided cable but not the expense and before anyone jumps in yes it is just for appearance, the cable will make no difference at all to the sound. Picked up 50m of 18ga O2 free patch cable and looked at a few videos.

Tried the suggested all red/all black and it was ok. Then did 2red/2black etc and that looked a bit weird. After a few experiments settled on this pattern. Wires are set up red/black/red/black etc and a simple 8 wire weave then the tails area 4 wire weave. Pants and bananas on their way. I could strip paracord and sheath the wires in cotton or even lash out and buy expensive sexy clear insulated cable but this will do, at least for now. 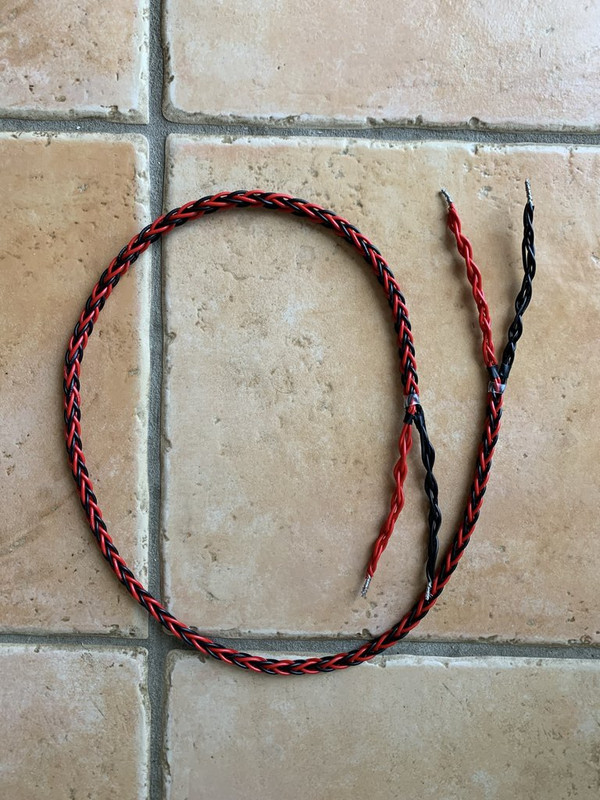 Nothing big, just to fill out the Ushers and will need a high level feed from the NAD.

Haakon said:
Recommend me a decent powered sub to match a NAD 3020 and a pair of Usher S520

Nothing big, just to fill out the Ushers and will need a high level feed from the NAD.
Click to expand...

Budget? Audioengine, Polk and Wharfdale all make good value subs up to $1k.

Edit: original or V2? I don't think the original had a sub out?
Edit2: if there is no dedicated sub out look for a sub with stereo line in line out. That way you can run preamp out to sub in and sub out to amp in. Let's you take the lower freq (<100Hz) away from the main speakers.
Last edited: May 2, 2022

Edit: original or V2? I don't think the original had a sub out?
Edit2: if there is no dedicated sub out look for a sub with stereo line in line out. That way you can run preamp out to sub in and sub out to amp in. Let's you take the lower freq (<100Hz) away from the main speakers.
Click to expand...

Good tip on line in and out.

Staff member
Received the pantaloons today so I made the second cable. Much much easier and faster than the first.

Need to machine a poly sleeve to fit around the 8 braid where the pants sit, the two exits are perfect but the pants are made for heavier insulated cables and there is a 2-3mm gap all around the 8 braid. Easily done, 17 od and 11 or 12 id. Now I am waiting on the bananas and the amperator! 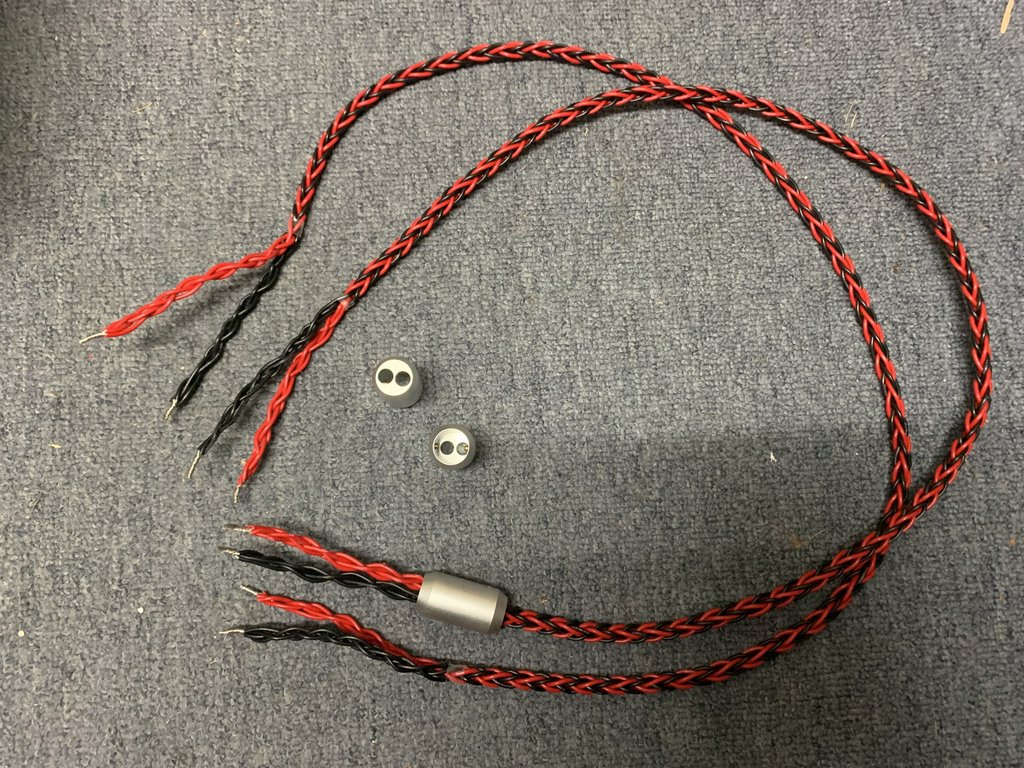 Staff member
The bananas arrived today. Also I had a parcel slip in the mailbox so I thought the amp was at the post office thus I hurried up and finished the cables. Turned up some nylon as a sleeve between the pants and 8 braid. Worked a treat. Slit the sleeve so the grub screws clamp the sleeve down on the braid. Also the slit let me fit the sleeve without undoing two ends of 4 braid.

The bananas are Nakamichi and I know this has long been a front for Chinese imperialism and not the ancient ninja of hifi but they seemed ok based on what I could see on the interwebby thing. They are ok and will do for an office stereo given the amp is only 15 real Watts and heavy current will go to the sub through a dedicated sub out but go for something else if you are buying bananas for home stereo. The bananas are a bit thin. I would have bought Neotech again but these are stupid expensive now and not worth it. Will have to keep an eye open but I am not paying $100+ for bananas when the whole cable cost about $30. 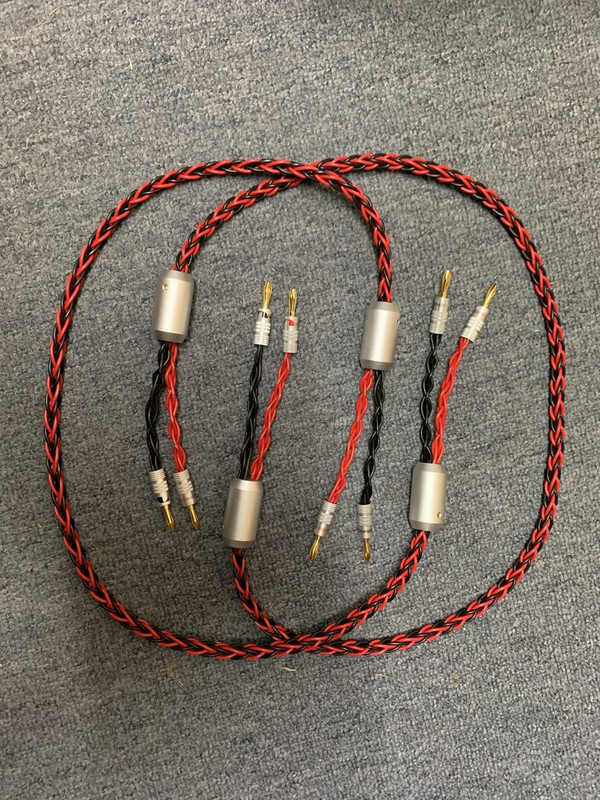 I will probably grab another 30m of black and strip some paracord for the outer and do something a bit fancier in the future. Will depend on how it all sounds.

Oh and the parcel at the post office is cat food. Bugger. 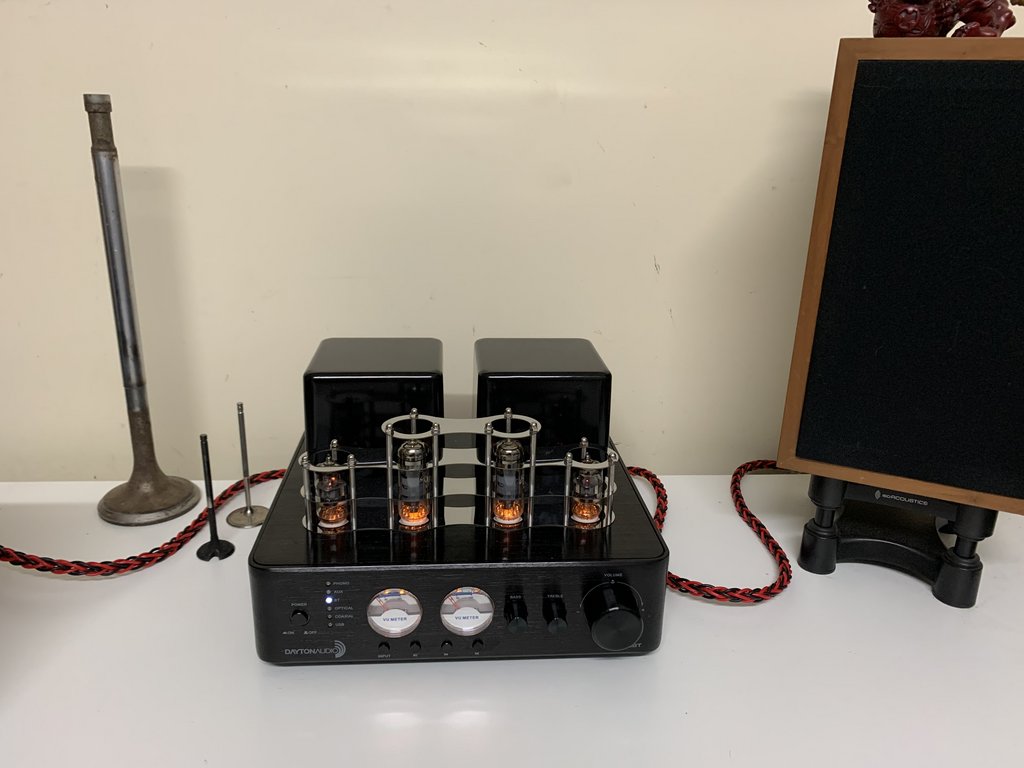 After a mild panic when it only had a US power cable but it has dual voltage with a selector switch.

It is really quite nice. Takes a few minutes to warm up properly but then it is very nice indeed. The sound is very rich and full and works very well in the study with the Linns and sub. Very loud if you wind it up. The power amp is solid state and the preamp is valve so sounds more like a class AB than a pure class A which is fine by me.

Discovered my aux cable is 500mm too short so will grab another and also noted that the music through BT loses some quality which I think I reador heard somewhere. Back to back it is noticeable. There is no BT antenna and the BT dropped out once or twice which may well be the source. The USB just runs through the songs from start to finish with no way of randomising the playlist. There is no display to know what is playing etc but that is no biggie. I will usually play from the aux and use BT and USB rarely.

Well worth the $400 asking price I reckon.

Dales Cannon said:
the music through BT loses some quality
Click to expand...

Doesn't bluetooth have a small bandwidth?

Doesn't bluetooth have a small bandwidth?
Click to expand...

Probably... the laptop mouse is also BT and that is the interference/pausing.

I think I meant frequency range

HAHA, no. That one is from a diesel loco V16 GM 2 stroke engine, though the V8, V12 and V16 all share the same individual cylinder heads. The burneded one is from a duratec 2.0 (no idea how I have that) and the other is a Cosworth V10 Ti valve. Got to keep the valves together.

Staff member
A bit more Karening and it seems that BT can be lossless. Can being the operative word. It depends on the source and receiver and I doubt very much if either of those that I have are anything special. I have noticed that it is ok when it is just me doing BT stuff but still when I use the mouse a lot, say CAD or photoshop there are pauses and drop outs in the sound. If wifey is home and on her computer or using the BT music in what is effectively the room next door it is worse. She doesn't notice any drop outs but they are there.

I have ordered a longer aux cable and when that arrives I can test the three sources against each other though I know it will be down to DAC vs Jetaudio+ on the pad. Interesting. To me anyway.
You must log in or register to reply here.
Share:
Facebook Twitter Reddit Pinterest Tumblr WhatsApp Email Link
Top