The GT IT1. Are there any of these still kicking around?

This is the site where the picture is from, theres a few other old-school bikes there.
http://bmxmuseum.com/bikes/gt_bicycles/21060
Last edited by a moderator: Sep 23, 2011
D

I love this thread. Bringing back so may memories of pouring through mags when younger
B

I totally approve of this!
B


JaRedy said:
The GT IT1. Are there any of these still kicking around?

This is the site where the picture is from, theres a few other old-school bikes there.
http://bmxmuseum.com/bikes/gt_bicycles/21060
Click to expand...

Not many at all, I have a brand new one "Marzocchi Version" and a used "Fox Version", I love this bike despite what some peoples opinions are, most have not even ridden one let alone seen one in the flesh, you know what it's like..

There were 2 versions, the only difference between the 2 was that one was fitted with FOX 40's and a DHX 5.0 and the later model Marzocchi 888 ATA SL's and a ROCCO WC..

It weighs a bit but is built like an absolute farkin tank..

sprocket said:
My have to make it my life mission to get a GT IT-1
Click to expand...

I'd love to find one of the 10-15(?)year old prototype ones, especially the one with the banana seat.
A

Some awesome bikes here, i hope in years to come they have not been recycled into shitty cars and fridges.
For most of us they represent certain times in our mtb world, some were good, others crap, but all pretty cool now.
I plan on collecting a few if they appear at a fair price, so far i have . . . . .

I've got a WTB up for the GT IT1. It's been up for a good 2 months now. Still no responses! Glad to know somebody actually owns one!

flamshmizer said:
Can't find any pictures but the old Yuri Minki is an interesting bike to say the least. I had a ride of one down a local track and it was a mega plush bike for its time.
Click to expand...

Your in luck mate, My old man used to know Damien, the fellow who's brainchild they were.
Truly a bike ahead of its time.
Some pics Tina kindly sent me a few years back.

Burrito_Boy said:
Your in luck mate, My old man used to know Damien, the fellow who's brainchild they were.
Truly a bike ahead of its time.
Some pics Tina kindly sent me a few years back.

Holy crap look at the size of those linkage forks. Awesome!!

Burrito_Boy said:
Your in luck mate, My old man used to know Damien, the fellow who's brainchild they were.
Truly a bike ahead of its time.
Some pics Tina kindly sent me a few years back.

This exact bike is under my mates house haha. I loved this old bike, I'll try and get some pictures of it in its current state. He was running boxxers and some disc brakes on it last time I saw it built. I met a bloke a while ago at Gap Creek on a green minki with Marz 66's and a pretty neat build on it too.
P

Here are the obscure bikes i have had / still have. Its funny, I never actually thought about it but I have had quite a few weird / very rare bikes. In fact most bikes I have had were rare.

First Dh bike back in 2000 was a Raleigh DHO. Bought off one of the Irish Team (John Lawlor) from back then complete with a Fox twin clicker, cracked Marzocchi MR T's, Hope C2's and Michelin DH soft tyres. It got stolen at university. No actual pics of the bike but it looked like this. 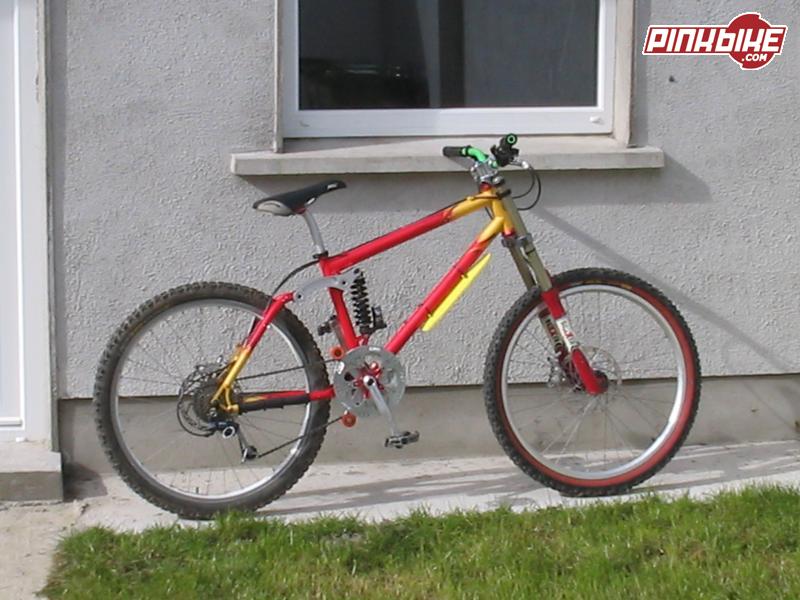 After the DHO was stolen I needed a new steed and this came up, Remec Dh pro. Carbon front end made by Elan (Maker of Snowboards and skis) and Risse racing rear end. Was a pretty good bike but was too small for me. At one stage I had some 2002 Red Dorados on it but I don't think I have any pics of that. 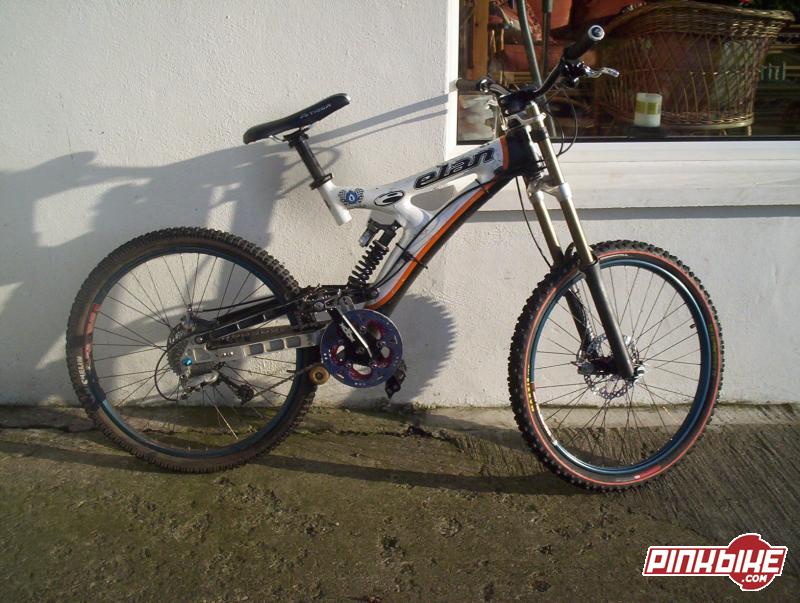 Got a bit sick of the small size of the Remec so I got a Foes DHS Mono ex race team bike. Initially it had the Dorados on it but I changed to 2005 888RC and the Curnutt was the bidnitz 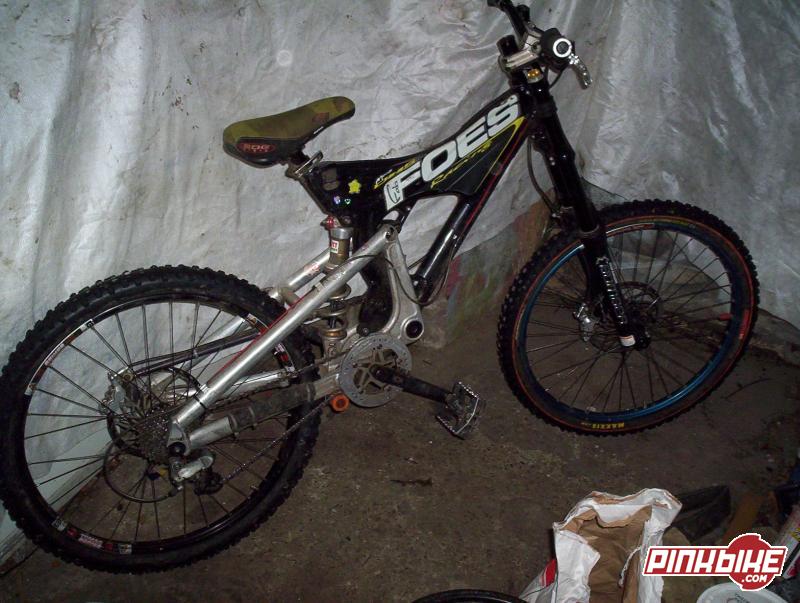 Next came a brief (2 rides) ride on an Ancillotti DHP. Didnt get on with it so i got rid....Guy sold it to me as was in the picture, 1 crank and 1 pedal?Spastic 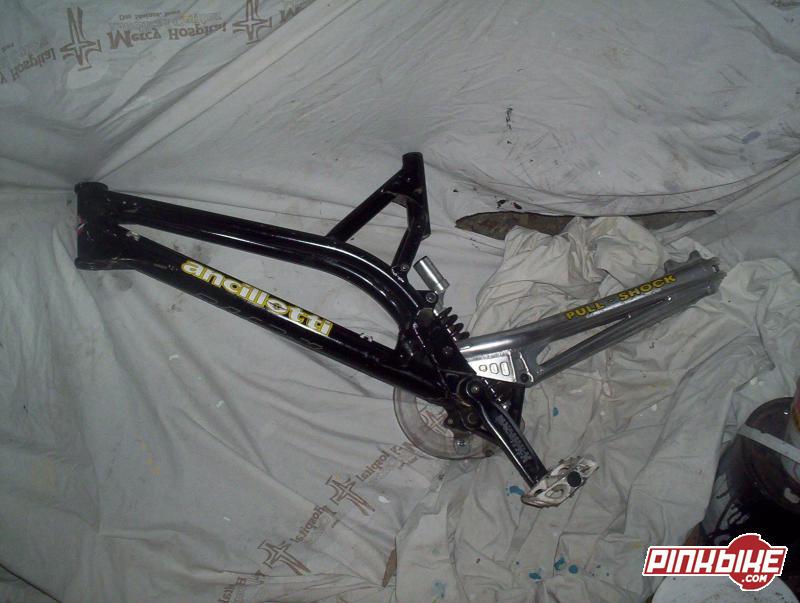 Rode a demo for a bit but then the opportunity came up to buy the bike I have always wanted, Brooklyn Machine Works Racelink! Bought it as is below from the uk importer ( It was his own bike and not well looked after) 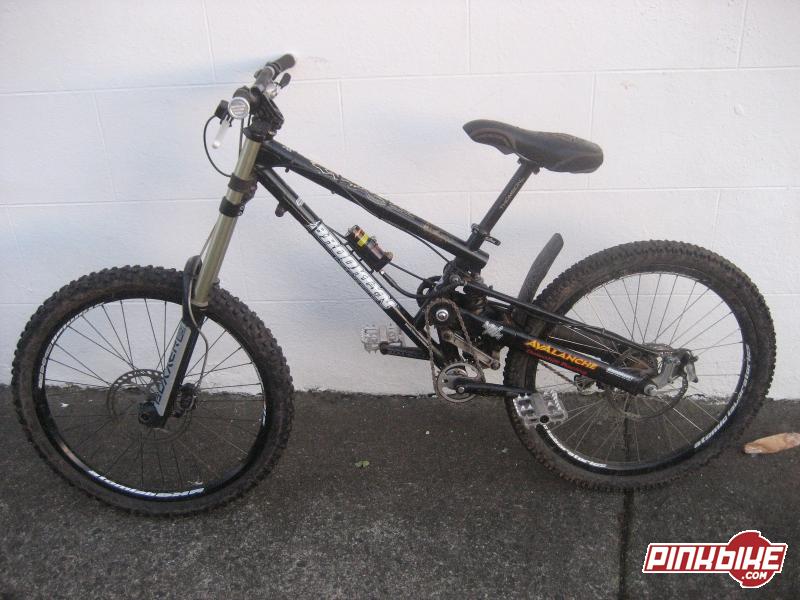 Rode it for about 3 weeks and cracked the rear end, rode it in Whistler 6 months later and cracked the front end. Got replacement front and rear ends and built it again like this 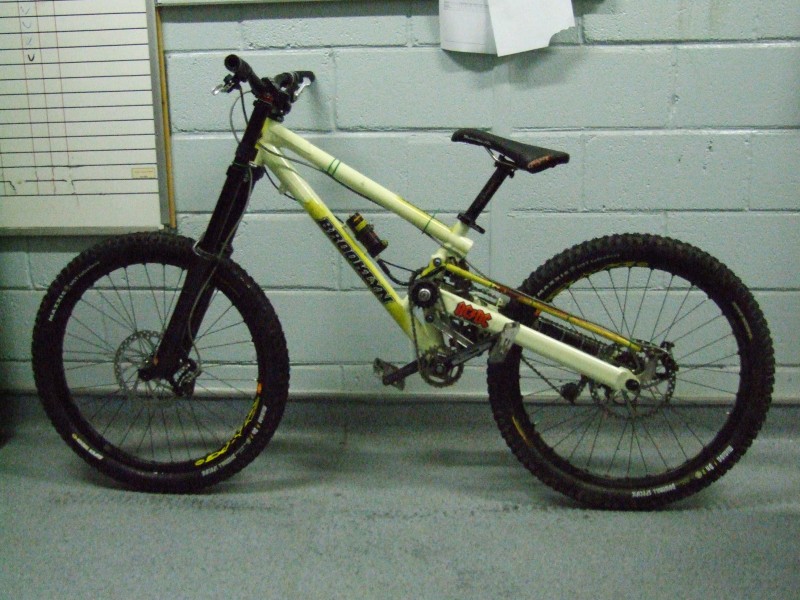 Looked waaay better in real life, I painted it myself. Then guess what, cracked the fucker again! This time another rear end. That was the end of it (Plus it was really small) Sold the bastard and got a V10 in large which was the sweetest bike I've had. 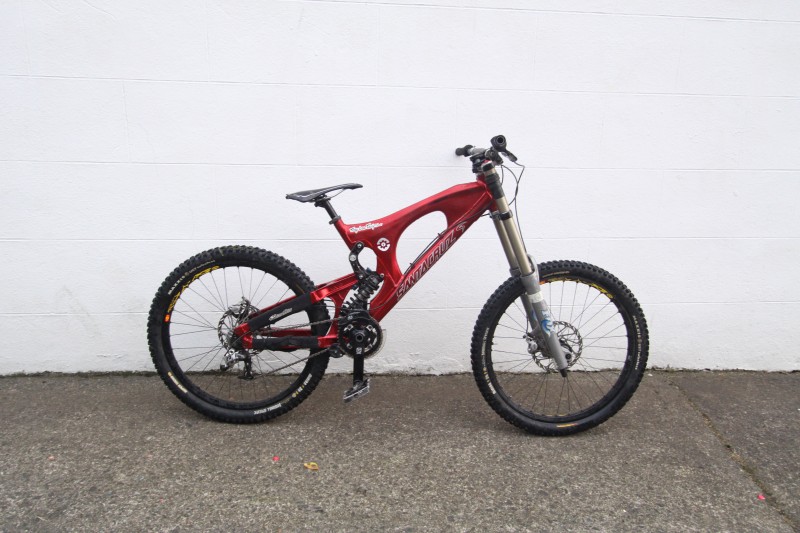 Then sold that to do a masters in London (Read expensive) and got a Curtis Thumpercross. The Thumpercross was a stupidly designed Huck to flat bike made with a T45 front end and a RISSE rear end. 15.5" bb and 68 or so HA with the stock shock. But I thought that if I stuck a shorter shock on it it would make a decent short travel bike to ride in Uni which it did but it was again too small. 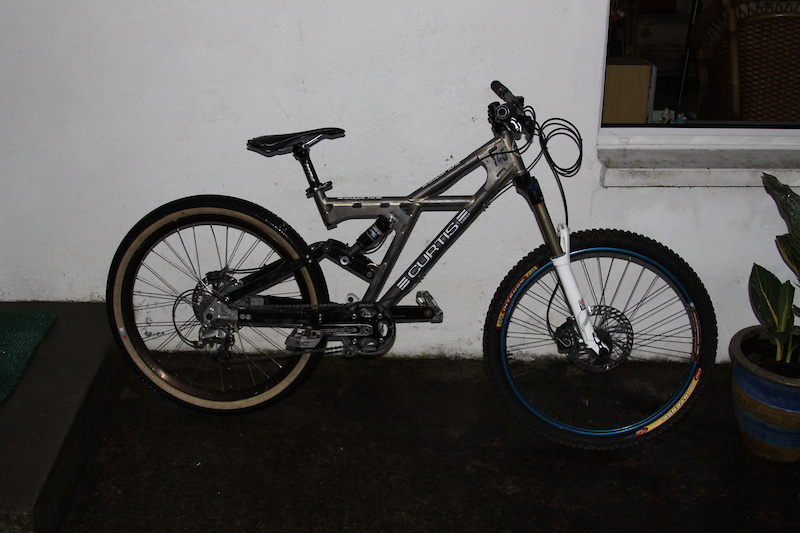 I still have the Curtis and I'm planning to use the Risse rear end in a Carbon fibre DH frame project but thats another story.


Last but not least!
My mate turned up to my house about a year ago with one of these in the back of the van!

Its a fully original 1997 Sintesi Bazooka Corrado Herin replica with all of the original parts. He told me that a bin man that he knows found it left out with rubbish bins on the side of a road out in the middle of nowhere!. The guy thought it looked good so he kept it but left it lying out in the rain for about 2 years and then decided that he wanted to ride with us so wanted someone to fix it up. Its been in my garage for about a year as the guy hasn't been back for it.

Burrito_Boy said:
Your in luck mate, My old man used to know Damien, the fellow who's brainchild they were.
Truly a bike ahead of its time.
Some pics Tina kindly sent me a few years back.
Click to expand...

That's the one, Tina's bike thats the one i rode. Looks like the same setup.

Its amazing how much the frame looks like a 2008-ish norco.

You heard it here first

Sorry for digging up an oldie (BUT A GOODIE) thread.

How this bike never made it into production is beyond me, it was so far ahead of its time and would give most bikes nowadays a run for its money i bet

that is awesome! how the hell does it even work? i cant see the linkage, and it doesnt look like a pull shock...
P


rone said:
Mountain Cycle San Andreas. They sounded like a filing cabinet falling down a flight of stairs but they were so cool.
Click to expand...

that was my dream bike back in the day .

You heard it here first

russthedog said:
that is awesome! how the hell does it even work? i cant see the linkage, and it doesnt look like a pull shock...
Click to expand...