Can America be fixed?

Today, voters in Kansas overwhelmingly rejected an amendment to their state constitution that would have stripped it of protections for abortion rights. With 86% of the vote in, 62% of voters supported abortion protections; 37% wanted them gone. That spread is astonishing. Kansas voters had backed Trump in 2020; Republicans had arranged for the referendum to fall on the day of a primary, which traditionally attracts higher percentages of hard-line Republicans; and they had written the question so that a “yes” vote would remove abortion protections and a “no” would leave them in place. Then, today, a political action committee sent out texts that lied about which vote was which.

Still, voters turned out to protect abortion rights in such unexpectedly high numbers it suggests a sea change.

It appears the dog has caught the car, as so many of us noted when the Supreme Court handed down the Dobbs v. Jackson Women’s Health decision on June 24. Since 1972, even before the 1973 Roe v. Wade decision, Republican politicians have attracted the votes of evangelicals and traditionalists who didn’t like the idea of women’s rights by promising to end abortion. But abortion rights have always had strong support. So politicians said they were “pro-life” without ever really intending to overturn Roe v. Wade. The Dobbs decision explicitly did just that and has opened the door to draconian laws that outlaw abortion with no exceptions, promptly showing us the horror of a pregnant 10-year-old and hospitals refusing abortion care during miscarriages. Today, in the privacy of the voting booth, voters did exactly as Republican politicians feared they would if Roe were overturned.

But this moment increasingly feels like it’s about more than abortion rights, crucial though they are. The loss of our constitutional rights at the hands of a radical extremist minority has pushed the majority to demonstrate that we care about the rights and freedoms that were articulated—however imperfectly they were carried out—in the Declaration of Independence.

We care about a lot of things that have been thin on the ground for a while.

We care about justice:

Today, the Senate passed the PACT Act in exactly the same form it had last week, when Republicans claimed they could no longer support the bill they had previously passed because Democrats had snuck a “slush fund” into a bill providing medical care for veterans exposed to burn pits in Iraq and Afghanistan. In fact, the bill was unchanged, and Republicans’ refusal to repass the bill from the House seemed an act of spite after Senator Joe Manchin (D-WV) and Senate majority leader Chuck Schumer (D-NY) announced an agreement on a bill to lower the cost of certain prescription drugs, invest in measures to combat climate change, raise taxes on corporations and the very wealthy, and reduce the deficit. Since their vote to kill the measure, the outcry around the country, led by veterans and veterans’ advocate Jon Stewart, has been extraordinary. The vote on the Promise to Address Comprehensive Toxics Act of 2022 tonight was 86 to 11 as Republicans scrambled to fix their mistake.

In an ongoing attempt to repair a past injustice, executive director of the Family Reunification Task Force Michelle Brané says it has reunified 400 children with their parents after their separation by the Trump administration at the southern border. Because the former administration did not keep records of the children or where they were sent, reunifying the families has been difficult, and as many as 1000 children out of the original 5000 who fell under this policy remain separated from their parents.

And we care about equality before the law:

Yesterday, the chair of the House Committee on Oversight and Reform, Carolyn Maloney (D-NY), and the chair of the House Committee on Homeland Security, Bennie Thompson (D-MS), sent a letter to Homeland Security inspector general Joseph Cuffari expressing “grave new concerns over your lack of transparency and independence” in his inspection of the January 6 attack on the U.S. Capitol. Secret Service texts and texts from the two top political officials in the Department of Homeland Security, Acting Secretary Chad Wolf and Acting Deputy Secretary Ken Cuccinelli, were erased, and a memo criticizing the department for not complying with requests for their disclosure was changed to praise their compliance. Maloney and Thompson asked Cuffari to recuse himself from the investigation and to provide them with documents and testimony.

At CNN, Tierney Sneed and Zachary Cohen broke the news that it is not just the Secret Service phones and acting DHS secretary’s and deputy secretary’s phones that were wiped of information from the days around January 6, 2021. The Defense Department wiped the phones of officials from the Army and the Defense Department who left at the end of the Trump administration. Those include the phones of former acting secretary of defense Christopher Miller, former chief of staff Kashyap Patel, and former secretary of the Army Ryan McCarthy. Miller, Patel, and McCarthy were involved in the military response to the events of January 6.

The erasures came to light in a lawsuit brought by American Oversight, a nonprofit government watchdog group formed in 2017, in early 2021. The Pentagon acknowledged the Freedom of Information Act request from American Oversight on January 15 and yet apparently wiped the phones anyway. Our laws say that official records are supposed to be retained, and a former Department of Defense official from a past administration told Sneed and Cohen that communications are always archived. Heather Sawyer, the executive director of American Oversight, told Sneed and Cohen that the erasure “just reveals a widespread lack of taking seriously the obligation to preserve records, to ensure accountability, to ensure accountability to their partners in the legislative branch and to the American people.”

McCarthy was a Trump appointee who played a key role in the deployment of National Guard troops on January 6; there have been conflicting explanations for the three-hour delay before they arrived at the Capitol. Trump put acting secretary of defense Miller into office after losing the 2020 election; Miller took office on November 9. Kashyap Patel was an aide to then-representative Devin Nunes (R-CA) when the two fought to strangle the investigation of Russia’s interference in the 2020 election; he went from there to the National Security Council and then in November 2020 became Miller’s chief of staff in the Pentagon. Both Miller and Patel were accused of blocking the transition of the Pentagon to the incoming Biden administration, and on December 18, 2020, Miller abruptly halted the transition meetings, saying that the halt was because of a “mutually-agreed upon holiday.” Biden transition director Yohannes Abraham told reporters, "Let me be clear: there was no mutually agreed upon holiday break."

White House call logs and diaries are also missing, and Cassidy Hutchinson, former chief aide to Trump’s White House chief of staff Mark Meadows, allegedly told the House Select Committee to Investigate the January 6th Attack on the U.S. Capitol that she saw Meadows burn papers after meeting with Representative Scott Perry (R-PA). Perry later asked Trump for a presidential pardon for his actions in trying to overturn the election.

Perry was apparently not the only one concerned about his actions. Today, Maggie Haberman and Luke Broadwater reported in the New York Times that two of the Arizona Republicans producing a slate of fake electors giving Arizona’s electoral votes to Trump contacted Trump’s lawyer Kenneth Chesebro with their concern that what they were doing “could appear treasonous.” (Chesebro put the word “treasonous” in bold.) The two were Arizona Republican Party chair Kelli Ward and Arizona state senator Kelly Townsend. Ward has since doubled down on Trump: on July 19 she led the state party to censure Arizona house speaker Rusty Bowers after his testimony before the January 6 committee that Trump and his supporters showed no evidence that he had, in fact, won the election.

If the majority is speaking up for our rights and freedoms, it seems the Republican Party is doubling down on extremism. Today, Bowers lost the Republican primary in a bid to move to the state senate. His opponent, who won by a large margin, was endorsed by former president Trump.

If it's one thing RWNJs can be consistently relied on, it's for doing really fucking stupid shit.

I haven't heard the audio, but what wild encounter!

pink poodle said:
I haven't heard the audio, but what wild encounter!

I'd done that with a wallaby but I wasn't concerned that it's mother was going to come out and maul me to death.

pink poodle said:
I haven't heard the audio, but what wild encounter!

It seemed a small gun to me given the nature of the throat he was concerned about. But I am not a gun enthusiast, so don't know.

Still, bears in the bush are about the only reason that it's legit to carry a handgun...

Thank dog, that roos are vegetarian.

Lazmo said:
Still, bears in the bush are about the only reason that it's legit to carry a handgun...

Thank dog, that roos are vegetarian.
Click to expand...

and that the carnivorous ones went extinct quite some time ago!

Lazmo said:
Still, bears in the bush are about the only reason that it's legit to carry a handgun...

Thank dog, that roos are vegetarian.
Click to expand...

Haakon said:
and that the carnivorous ones went extinct quite some time ago!
Click to expand... 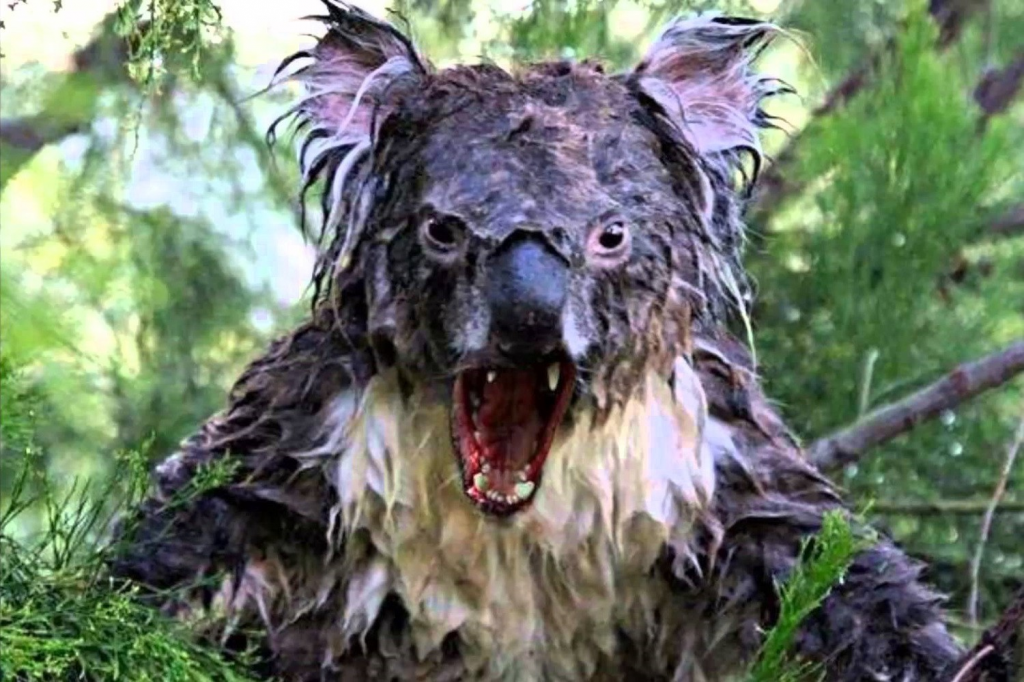 There's effective bear spray these days, the guy is a cock anyway. If there was a group of people walking near the bushy part he would hit them at that speed.

More people need to be warned of the risks before they visit Australia.

More people need to be warned of the Ross before they visit Australia.
Click to expand...

Yep...the Ross. It's one of those unexpected typos that fuck up your posts. Look out! They'll get you too.

Haakon said:
and that the carnivorous ones went extinct quite some time ago!
Click to expand...

Someone needs to remind the kangaroos in Maaroom! 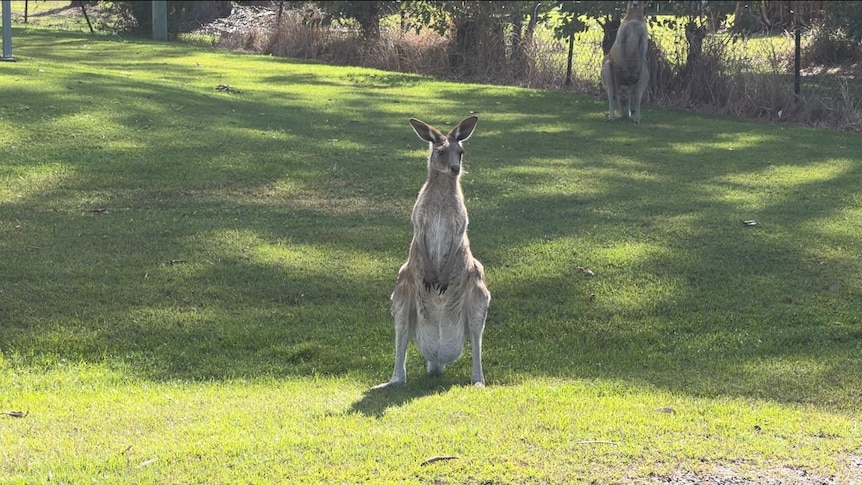 Residents in a Queensland coast town carry a big stick if they dare to venture out on an afternoon walk, after seven reported kangaroo attacks in the past 12 months — including one where a woman received a broken leg.

And Palmwood for that matter... 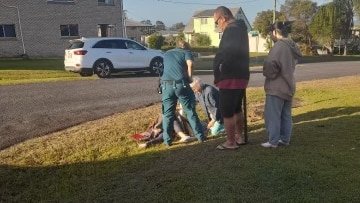 The woman's daughter says her mother could have died if it were not for those who raced to her aid. 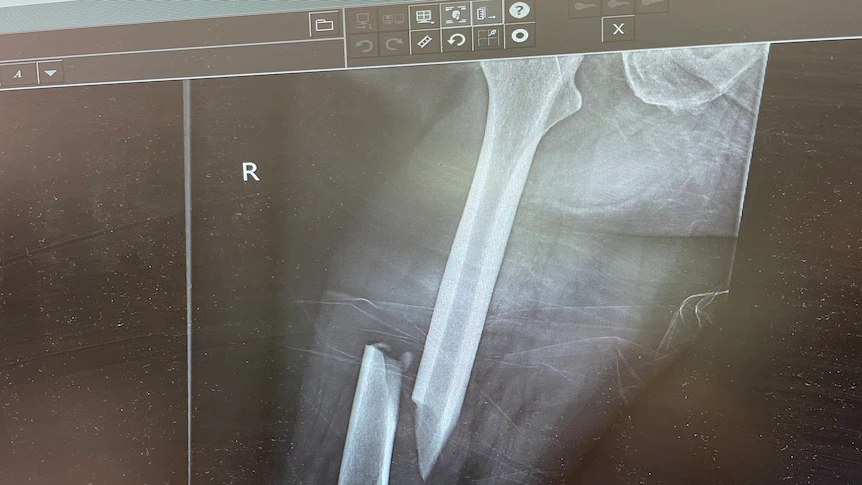 Nambra said:
Someone needs to remind the kangaroos in Maaroom!

Residents in a Queensland coast town carry a big stick if they dare to venture out on an afternoon walk, after seven reported kangaroo attacks in the past 12 months — including one where a woman received a broken leg.

And Palmwood for that matter...

The woman's daughter says her mother could have died if it were not for those who raced to her aid.

Can hench anywhere any time

Sent from my M2012K11AG using Tapatalk

I ate kangaroo for dinner last night. It was delicious.

Once you've seen two males beating the absolute SHIT out of each other up way too close, the amount of force they can inflict on each other will have you reassessing how cute and cuddly a kangaroo is. I stumbled upon a pair at night, I was walking the bike through a pedestrian gate that the bike had to be on the back wheel to fit through, to come out the other side to Kangaroo smack down. Scared the fuck out of me, I had the headphones on and didn't hear them. The noise the leg kick makes on a kangaroos gut sounds like a Hollywood movie sound effect.